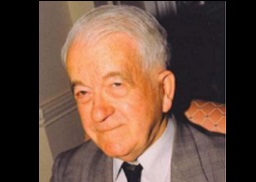 On September 14, Keith Copeland, one of IFMBE’s most distinguished members, passed away.

Keith Copeland was born on the 28th of August 1921 in Bury St. Edmunds, UK, and received his education at Cullford School in Suffolk. After passing the examination for the civil service, he started his professional life in the Air Ministry in the Works Directorate on the maintenance of aerodromes and was then called up to the Royal Air Force for training as a radio and wireless mechanic.

In 1941 he was summoned to war and was employed at numerous radar stations in England and India, working on special radar equipment that was used for navigating aircraft. After the war he resumed his work at the Air Ministry until he was offered a position in the Biophysics Department of the University College London.

It was the year 1947 when neither hospitals nor research facilities had sufficient equipment, so Keith started working to design and develop instruments for physiological research and many of his devices, such as simulators, ended up in hospital use. Today we would call somebody doing this kind of work a Biomedical Engineer. Over the next years, Keith Copeland became acquainted with others working in the same field, some of whom even had the same background and they started to call their research Medical Electronics. Like everywhere else in the world, there was no professional biomedical engineering society in England at the time, there were only the Institution of Electrical Engineers (IEE), and the British Institution of Radio Engineers that later became part of the IEE. Therefore communication among those working in Medical Electronics was loose even within a country and there was no globally established network. It was a logical next step in the further development of the profession to establish an international framework for communication and collaboration, and in June of 1958, about 50 leading scientists in the new field, Keith Copeland among them, met in Paris to prepare the foundation of “The International Federation for Medical Electronics” and to organize the new Federation’s first conference. The meeting became known as the “First International Conference on Medical Electronics” and the participants represented 9 countries.

In 1971, during the 9th International Conference of the Federation, which had changed its name to International Federation for Medical and Biological Engineering, Keith Copeland, Secretary General of the Biological Engineering Society (BES) of the UK at the time, was asked – quite unexpectedly, as he said himself – to become the Federation’s new Treasurer. Keith agreed and he kept that position for 14 years, which meant beneficial, long time continuity for the Federation and its financial matters. Keith Copeland contributed to the prosperity of the Federation by negotiating the Federation’s journal contracts with the publisher, and, after long negotiations with the British Office of Revenue, he succeeded to obtain tax-exempt status for IFMBE in 1985.