EPWS President Dr. Brigitte Mühlenbruch has been honoured with the Order of Merit 1st Class of the Federal Republic of Germany in acknowledgement of her pioneering work in the promotion of women in science at national as well as European level. She received the Order of Merit by the German Federal President Joachim Gauck himself in Berlin on 6 October 2014 on the occasion of the Day of German Unity.

Brigitte Mühlenbruch worked as a scientist at the University of Bonn for almost 20 years before becoming the University’s first Equal Opportunities Commissioner 1988-2000. Since the late 1980’s her research and concept development have focused on gender equality, gender mainstreaming, and programmes and processes regarding the recruitment and retention of female scientists in Germany as well as at the EU level. She was founder and long-term spokeswomen of the Federal Conference of Gender Equality Officers in Higher Education in Germany (BuKoF) 1992-1999 and co-founder and Vice President of the Christiane Nüsslein-Volhard-Foundation.

Brigitte Mühlenbruch initiated the Center of Excellence Women and Science CEWS in Bonn and was its Managing Director 2000-2005, managing several research projects funded by the German government and the EU in the field of gender equality in science. Under her leadership, CEWS drafted the winning proposal for the establishment of the European Platform of Women Scientists EPWS in Brussels and signed the contract with the European Commission in 2005. In her different capacities, Brigitte Mühlenbruch is member and scientific advisor of several high profile national and European scientific committees, commissions and expert groups.

The Order of Merit of the Federal Republic of Germany is the highest tribute the Federal Republic of Germany can pay to individuals for services to the nation. The Order of Merit may be awarded to Germans as well as foreigners for achievements in the political, economic, social or intellectual realm and for all kinds of outstanding services to the nation in the field of social, charitable or philanthropic work. No pecuniary reward is attached. 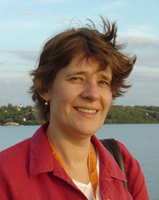 Maria SIEBES, member and past chair of WiMBE, has been elected to the IFMBE Admin Council at the election held in Beijing, China in May 2012.

Maria Siebes received her Diplom-Ing. degree (Honors) in 1981 from the University of Applied Sciences in Giessen, the first institution in Germany to offer a program in Biomedical Engineering. After 2 years employment as a Research Engineer in Cardiology at the Kerckhoff-Klinik for Heart and Lung Research, she received a Fulbright Scholarship and started graduate studies in Biomedical Engineering at the University of Southern California in Los Angeles, where she obtained her M.S. (1984) and Ph.D. (1989) degrees, with fellowships from AAUW and ZONTA International. From 1983 – 1989 she also worked as a member of the Biomedical Image Processing Group at the Jet Propulsion Laboratory/California Institute of Technology in Pasadena, CA.

In 1989, she became Asst. Professor the Dept. of BME at the University of Iowa in Iowa City, IA, where she received an Outstanding Teacher Award and research grants from NIH, NSF and the Whitaker Foundation, among others. In 1996, she spent 9 mos as a Visiting Scientist at the Cardiovascular Research Institute of the University of Amsterdam. Dr. Siebes returned to Europe in 1997 and worked as a Senior Research Scientist at the Dept. of Cardiology at the Academic Medical Center, University of Amsterdam. In 2002, she joined the Dept. of Biomedical Engineering and Physics as University Docent became Principal Investigator in 2007.

Her research interests are cardiovascular hemodynamics and perfusion, focusing on the coronary circulation, and she is involved in the Virtual Physiological Human initiative. Her interdisciplinary research ranges from bench to bedside and is funded by grants from the Netherlands Heart Foundation, EU FP7-ICT program (euHeart), and by a national consortium grant from the Center for Translational Molecular Medicine. Dr. Siebes is a Fellow of AIMBE, senior member of IEEE-EMBS, and member of Sigma Xi, AHA, APS and national societies. She serves as Council Member of EAMBES and chaired the IFMBE Women in MBE Committee from 2003-2009.